October 20, 2012 by ConcertKatie No Comments 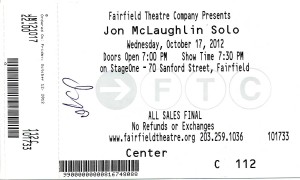 Wednesday night Jon McLaughlin returned to Stage One for his second show there.  Opening for him was Xenia from Season 1 of The Voice.  Xenia did a set of 8 songs – a couple of covers – Home by Phillip Phillips and Animal by Neon Trees as well as the songs from her recently released EP (check it out on iTunes for $3.96!).  She mentions how that while she was on The Voice she told her coach, Blake Shelton, that she was a huge fan of Jon’s and it was him who made her want to do music for a living.  Jon ended up coming to LA to meet her and next thing you know she is singing on his CD and now opening for him on tour!  Xenia has a reall amazing voice and I just love her! She also talked a bit about a charity – Love 146, she visited them in New Haven earlier in the day and they are trying to prevent sex trafficing of children in third world countries and in the US as well.

Then it was time for Jon.  He is completely solo this tour – just him and his piano.  The setlist was a bit similar to his last visit, but he had said that last time he didn’t know how to play the songs and now he did since the album had been released so it would be a better show.  Before he did Summer is Over he talked about how it is a duet with Sara B, but that she wasn’t there and wouldn’t be coming out so don’t expect her to and that he would be singing all her parts. He was so funyjn in between songs, but I unfortunately didn’t buy the recording of the show (dumb!) so I can’t remember exactly what all he had said. (Jon if you’re out there and I can buy the recording after the fact let me know! Kicking myself now for not having done it!)

He talked a bit about how they did the new record out in Indiana with his whole band, also from Indiana and how he stayed up really late working on the mixes from the tracks that they recorded that day.  He didn’t know how it worked here in CT (since we’re near a city that never sleeps) but in Indiana after 10pm no one bothers you, so he was startled to recieve a text at 3am.  The text was from a number he didn’t recognize and it said that it was Blake Shelton and he was a coach on The Voice and wasn’t sure if that was ringing any bells.  Of course what jon responded was hilarious but I can’t remember exactly now except that it ended with a smiley face. Anyway – they went back and forth via text and that is how he ended up going out to LA to meet Xenia.  She sings on Maybe It’s Over – the song Jon was working on the night Blake first texted him.  He had her come out to sing it with him.

For the encore he said he was completely off the set list and would take requests.  Two or three songs got yelled out and he said he’d play the first one he heard because she sounded hostile – he did Human.  The second song he did was Beautiful Disaster.

Afterwards he said he’d hang out – but I ended up skipping out right after (which is why I missed out on the dang recording of the show. stupid, stupid, stupid)

Anyway – Jon is an amazing talent and if you get the chance to see him you should definitely take it! He mentioned he’d hope he’d get to come back to the Stage One a third time and I certainly hopes that he does!!