October 28, 2012 by ConcertKatie No Comments

For day #2 at Epcot, I went by myself and I went in the afternoon so I wouldn’t be at the park all day trying to find things to keep myself entertained with.  I got there about 2pm and hit up The Seas and The Land and then went “around the world”.  About 3:45 I was going to make another loop around the World Showcase, but there was a drawbridge that was up (that I had no idea even existed) and so since I was stuck waiting for the globe to pass through, I decided to just go and get in line for the Hanson show.  It was about an hour wait and I ended up right up front in the spot I had for Show #3 the night before.

For Show #2 I decided to stay in the back after going to get dinner (Mickey ice cream, of course!) and then after a few songs I went and got back in line.  I could still kind of see the show from the line and I could hear it loud and clear.  This was the only set that they did a cover at – Oh Darlin – one of my favorites!

For Show #3 I was back at my up close front spot (which I ended up having for 3/6 shows!) but this time there were people in front of me that stood (the other 2 shows didn’t have that) so I did have to move around a bit more in order to be able to see – but it was still a great way to end the night.

For there being some repeat songs in each of the sets, I think they did a great job mixing up the other songs and we got a great variety of songs.  It was definitely a ton of fun and I am seriously considering going back again next year should Hanson perform again. (Provided I still have vacation left in October, considering they are doing a world tour and I will also be seeing them in Jamaica in January!) 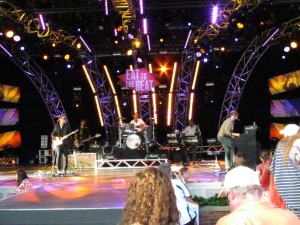 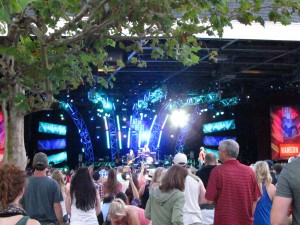 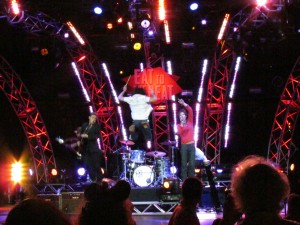