Book Review: The Beautiful Music All Around Us

September 25, 2012 by ConcertKatie No Comments 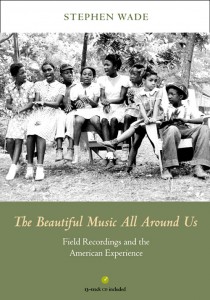 I love reading about the early songs and how they were created and by who and their lyrics.  I took a “History of Rock N Roll” class in college (yes, it counted as an elective and I got credit for it – how awesome was that?) and we learned a lot about how music started and evolved in to what it is now.

The Beautiful Music All Around Us: Field Records and the American Experience intiminated me at first.  Although it only chronicles 13 performances and their stories, the book was over 500 pages!  However, once I started reading it I got in to it quickly and then was surprised that the book ended just under 400 pages – the rest were all notations for the text! (You’d think by now I would realize that this is how these books work.)

One of the songs that it mentions is Shortenin’ Bread, which I definitely remember singing growing up, so it is always interesting to see the background for these songs. (And did anyone ever notice a lot of songs we teach kids are morbid? Not this one in particular, but think about it… ring around the rosie?)

If anyone is looking to further their knoledge on the history of American folk songs – than this is definitely the book for you.  You can also use it as a strating point because the notations at the end will lead you to many more books and resources to check out.

I received a free ecopy of this book from the publisher in order to write this review. I was not otherwise compensated.

The Beautiful Music All Around Us presents the extraordinarily rich backstories of thirteen performances captured on Library of Congress field recordings between 1934 and 1942 in locations reaching from Southern Appalachia to the Mississippi Delta and the Great Plains. Including the children’s play song “Shortenin’ Bread,” the fiddle tune “Bonaparte’s Retreat,” the blues “Another Man Done Gone,” and the spiritual “Ain’t No Grave Can Hold My Body Down,” these performances were recorded in kitchens and churches, on porches and in prisons, in hotel rooms and school auditoriums. Documented during the golden age of the Library of Congress recordings, they capture not only the words and tunes of traditional songs but also the sounds of life in which the performances were embedded: children laugh, neighbors comment, trucks pass by.

Musician and researcher Stephen Wade sought out the performers on these recordings, their families, fellow musicians, and others who remembered them. He reconstructs the sights and sounds of the recording sessions themselves and how the music worked in all their lives. Some of these performers developed musical reputations beyond these field recordings, but for many, these tracks represent their only appearances on record: prisoners at the Arkansas State Penitentiary jumping on “the Library’s recording machine” in a rendering of “Rock Island Line”; Ora Dell Graham being called away from the schoolyard to sing the jump-rope rhyme “Pullin’ the Skiff”; Luther Strong shaking off a hungover night in jail and borrowing a fiddle to rip into “Glory in the Meetinghouse.”

Alongside loving and expert profiles of these performers and their locales and communities, Wade also untangles the histories of these iconic songs and tunes, tracing them through slave songs and spirituals, British and homegrown ballads, fiddle contests, gospel quartets, and labor laments. By exploring how these singers and instrumentalists exerted their own creativity on inherited forms, “amplifying tradition’s gifts,” Wade shows how a single artist can make a difference within a democracy.

Reflecting decades of research and detective work, the profiles and abundant photos in The Beautiful Music All Around Us bring to life largely unheralded individuals–domestics, farm laborers, state prisoners, schoolchildren, cowboys, housewives and mothers, loggers and miners–whose music has become part of the wider American musical soundscape. The book also includes an accompanying CD that presents these thirteen performances, songs and sounds of America in the 1930s and ’40s.

Musician, recording artist, and writer Stephen Wade is best known for his long-running stage performances of Banjo Dancing and On the Way Home. He also produced and annotated the Rounder CD collection that gave rise to this book, A Treasury of Library of Congress Field Recordings. Since 1996 his occasional commentaries on folksongs and traditional tunes have appeared on National Public Radio’s All Things Considered.