September 5, 2012 by ConcertKatie No Comments 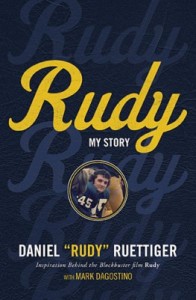 You may have seen the movie Rudy staring Sean Astin. I know I’ve seen it a whole bunch of times.  Well, this book, Rudy tells the story of the real Rudy, Daniel “Rudy” Ruettiger in his own words. While I obviously knew the story because of watching the movie, it was nice to read things from Rudy’s own perspective and not from movie makers.  Not to mention, a 250+ page book is going to contain a whole heck of a lot more information in it than a couple hour movie ever could.

He is still called Danny by his family – but with 14 kids in his family, the teachers couldn’t be bothered to figure out who was who so at first they were all called Ruettiger and then that got shortened to Rudy – for all the boys in his family!

My motto in life is “Dream Big” and it seems like Rudy’s is too. He wasn’t the best student and ended up getting a job out of high school and then joining the Navy.  But the whole time he wanted nothing more than to play football for Notre Dame. He enrolled at Holy Cross and was determined to work hard enough and get his grades up enough so that he could transfer to Notre Dame eventually.  And that he did.

While he may have only played for 27 seconds, his dream did come true and he shows that if you never give up and if you work hard at your dreams, anything is possible.

After making his Notre Dame dream come true, he moved on to a new dream – making a movie based on his life.  Based on my intro to this post – I think you know that he was able to make this dream happen as well!  Of course, it didn’t come easy, but nothing worth working for does.  Rudy had several meetings and was shot down several times.  The movie idea got shelved and there were a bunch of hurdles to jump over in order to make it happen – but eventually everything fell in to place.

Even if you think you know Rudy’s story from having seen the movie, I recommend you check out this book.  It is very inspiring and he has a lot of great anecdotes in the story that were not in the movie (at least not that I can recall) and it goes beyond his life that was depicted in the movie.  After reading this I am very motivated to try and achieve a few of my long shot aspirations that seem impossible.

The inspirational real-life story of the man behind the beloved movie Rudy, his continued determination to make his dreams come true, and how you can dream big too.
How does a lower middle class kid, who suffered through school with undiagnosed dyslexia, get into Notre Dame and become the inspiration for millions in a Hollywood film that has become one of the most inspiring sport movies ever made? He never gave up.
For the first time, read Daniel “Rudy” Ruettiger’s real life story and learn the behind-the-scenes details of the ten years it took to make the movie and how that tossed him into a new career of public speaking that continues on stages today alongside world-class leaders and speakers.

Divided into four parts, each include details of the failures and hard lessons he’s learned along the way and how hitting the reset button was often the best thing that ever happened to him:

Rudydoesn’t represent some far-fetched Hollywood fantasy that most people can never attain-the power of his story comes from the fact that at heart he’s just an “Average Joe.” The moral is that anyone with a dream can make that dream a reality-as long as they’re willing to put in the hard work, and heart, it takes to get there.