Book Review: Reaching For The Stars

September 6, 2012 by ConcertKatie No Comments 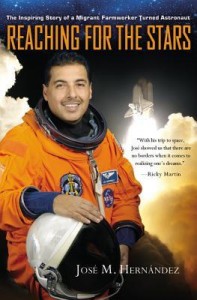 I’m not sure if I mentioned it before, but when I was a kid I totally wanted to be an astronaut.  In about the 4th grade I started learning about space and the planets and I was captivated.  Of course, any book about anyone becoming an astronaut is one that I am going to want to read because there is still a small part of me that would LOVE to go to space.

Jose Hernadez was the first Mexican-American to earn his wings as a NASA astronaut.  He started out working on the farm with his parents.  But they told him to continue to go to school and work hard so that he would become something and not be stuck working on the farms for the rest of his life.

Jose and his family moved back and forth between Mexico and California which made going to school consistently difficult.  Eventually one of Jose’s teachers helped convince his parents to settle in one area so that he could have an uninterrupted education.

He ended up going to school for engineering.  It was funny to see his journey through school – a lot of it was all too familiar for me.  One story that stood out was one of his teachers saying that you should always ask a question if you had one or if you were confused.  Then he wrote some stuff on the board.  It made no sense to Jose.  He valued his education and so he decided to speak up and tell the teacher that he had no idea what he had just written on the board.  The rest of the class laughed at him (I think this is a HUGE reason why kids don’t speak up when things confuse them in class – they are too concerned over what the rest of the class thinks of them. I know this was one of my big problems).  The teacher explained that he shouldn’t know what it was – it was a joke and that it was all nonsense.

It was great reading about Jose’s journey from child to adult and to astronaut. It was incredibly inspirational and a true testament to the fact that if you set your sites on something and work hard – you can achieve it!

In August of 2009, José M. Hernández became the first Mexican-American to earn his wings as a NASA astronaut. An impressive achievement in itself, Hernández’s accomplishment is even more amazing when you realize that journey he took to get there…

REACHING FOR THE STARS tells the story of a child growing up as a migrant farm worker in the agricultural fields of Mexico and America, who dared to dream of one day becoming an astronaut. The barriers José faced were formidable. Following the yearly crop cycles, José and his family moved each year throughout Mexico and California, never staying in one area for too long.  His parents’ love and commitment to education was the glue that kept the family together in lean times, through long winters when there was no work. Things changed for José, when two grade school teachers supported and encouraged his parents to settle in California, for the benefit of their children’s education. It took only a few adults who had faith in José to give him what he needed to believe in his dreams. And now, by sharing his journey, José hopes to instill that belief in others.

José M. Hernández is an engineer and a former NASA astronaut who was part of the crew of the STS-128 Space Shuttle mission. Hernández also founded the Reaching for the Stars Foundation, a non-profit organization that “strives to ensure opportunities for children to pursue their educational and professional goals regardless of perceived obstacles.”