September 26, 2012 by ConcertKatie No Comments 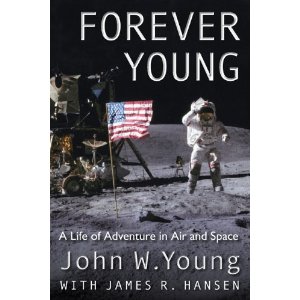 Even before I thought about being an engineer, I wanted to be an astronaut.  Although I don’t think that at that time I realized the two could be related.

Forever Young tells the story of John Young, in his own words, about his life as an engineer to an astronaut.  I found it to be fascinating and incredibly well written.  I love how he described things, it really made me picture what he was talking about and almost re-live those moments with him.

Young was one of the early astronauts and talks a bit about how they didn’t really know what they were doing at times, but yet somehow things seemed to work. He talked a lot about simulation training for preparing themselves to be on the moon.  I could not even imagine!

It was fascinating to read what kind of work went in to exploring on the moon.  How exciting that must have been. Every rock they found had to be documented, several photos for each rock showing where they found it, what it looked like, where it was found in relation to the space craft. I think taking that many photos of something would be the perfect job for me! 😉

For anyone who is interested in space or wishes to be an astronaut – this book is for you.  Or if you just want to know what it is like in space and on the moon from someone who worked with NASA for more than four decades – then this is the book for you!

The much-anticipated autobiography of a veteran astronaut

He walked on the Moon. He flew six space missions in three different programs-more than any other human. He served with NASA for more than four decades. His peers called him the “astronaut’s astronaut.”

Enthusiasts of space exploration have long waited for John Young to tell the story of his two Gemini flights, his two Apollo missions, the first-ever Space Shuttle flight, and the first Spacelab mission. Forever Young delivers all that and more: Young’s personal journey from engineering graduate to fighter pilot, to test pilot, to astronaut, to high NASA official, to clear-headed predictor of the fate of Planet Earth.

Young, with the assistance of internationally distinguished aerospace historian James Hansen, recounts the great episodes of his amazing flying career in fascinating detail and with wry humor. He portrays astronauts as ordinary human beings and NASA as an institution with the same ups and downs as other major bureaucracies. He frankly discusses the risks of space travel, including what went wrong with the Challenger and Columbia shuttles.

Forever Young is one of the last memoirs produced by an early American astronaut. It is the first memoir written by a chief of the NASA astronaut corps. Young’s experiences and candor make this book indispensable to everyone interested in the U.S. space program.

John W. Young, retired astronaut and former NASA executive, has received more than eighty major awards for his career in aerospace, including six honorary doctorates. James R. Hansen is professor of history and former director of the Honors College at Auburn University. He has been associated with the NASA History Program for the past thirty-one years, and is the author of First Man: The Life of Neil Armstrong and coauthor of Truth, Lies, and O-Rings: Inside the Space Shuttle “Challenger” Disaster.