Book Review: For The Sender

September 18, 2012 by ConcertKatie No Comments 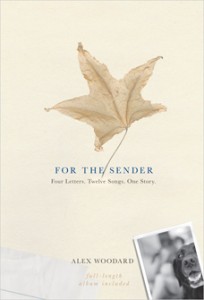 I’m not sure how to explain this book (and the fact that the “blurb” is nearly 500 words is not helping me any either as it tends to cover everything.)  But Alex is a musician and he decides to start writing songs about other people based on letters that they write him.  The book chronicles 4 of the letters he received and the songs that came from them.  It also tells a bit about Alex’s life and how he came to this point in his life after quitting his job and deciding that he wanted a dog and trees.

The content was a bit heavier than I was expecting – probably because by the time I actually got around to reading it was a long time after I had selected it from NetGalley. (It wouldn’t work on my Nook so I had to find the time to sit still at my computer and read it.  Easier said than done, I get easily distracted!)

All of the letters that inspired the songs are included and all of the lyrics to the songs that these letters created are included as well.  I am assuming that the hard versions include a CD as well since it says “CD Included” but unfortunately I only had an e-copy to read so I didn’t get to hear the songs for myself.

This was a touching story and a very interesting concept.  There is an address at the end where you can send a letter if you’d like for it to be considered to be turned in to a song.  It says that while they read every letter that they receive, they do not write based on all of the letters.

I received a free e-copy of this book from the publisher through NetGalley in order to write this review. All opinions are my own.

. . . Grammy-winning songwriters, singers, and engineers, with millions of records sold, took your letters and turned them into songs?     After years of chasing his dreams, singer-songwriter Alex Woodard finally had a record deal and an album to promote. He offered to write a song for anybody who preordered his self-titled release; all they had to do was send him a letter about their story, and he would write and record a song just for them at his kitchen table.     The promotion came and went-and as the year wore on and the record deal fell apart, Alex watched his best friend, a Labrador named Kona, die in his living room with her head in his lap. Her passing shone a harsh light on how far away Alex really was from his dreams, and autumn found him trying to let go of both Kona and everything he thought would have happened by now.     And then he got a letter from Emily.     Emily had finally found the love of a soul mate, a true kindred spirit and best friend, when autumn took him away. Every year since his passing, she wrote him a letter to say that she missed him and remembered the beautiful moments they had together. She usually tucked the letter away into a box, since there was nowhere to send it, but this autumn she sent the letter to Alex.     She didn’t want Alex to write a song for her. She just felt like his songs were pieces of himself he gave to others, and she wanted to give him a piece of herself as her own kind of gift.     But Alex did write a song for her. And that song became two, then three, then eventually twelve as more letters came in and Alex showed them to a group of talented musicians who share “family dinners” in his San Diego neighborhood. The letters ranged from descriptions of unfathomable grief and destruction in Haiti to more intimate tales of being and belonging, which soon took on a life of their own through the songs.     He didn’t know it yet, but Emily’s letter had started Alex down his own path of moving through loss and reconciling broken dreams, culminating one cold December night on a small stage in suburban Atlanta. And he found out for himself that a song is like a letter, and a letter is like a prayer.      It’s more for the sender.

CD INCLUDED
Proceeds generated by the songs from each letter go to a cause of the sender’s choice.
To learn more, visit: www.ForTheSender.com