Book Review: The Color Of Snow 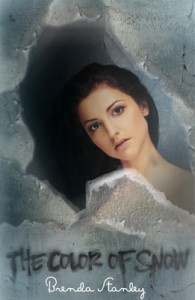 I have to say that this book was SO GOOD.  Sophie is found living in her room, it has a lock on it – but it locks from the inside – to keep people out.  And there are bars around her door.  It turns out that her father actually kidnapped her when she was just days old and kept her in captivity the whole time to protect her from this “curse” that is believed to be on her.

He comes home from work at lunch to feed her and check in on her chores and schoolwork.  She is not allowed outside.  Then she meets brothers Damien and Danny when their mother comes over to see her father. She is instructed to lie about living there so no one will know that she is there.  Except that the boys really like Sophie (she is incredibly gorgeous, but she doesn’t know it because her father has removed all the mirrors from the house.)  Secretly, Sophie meets with the boys each day and plays with them  until Danny comes by himself and confesses his love for her and ends up dead.  Sophie’s Papa finally tells her of the curse.

Damien eventually comes around again and tries to rescue Sophie once he sees the situation she is in, but Papa shoots him. Papa ends up arrested and Sophie ends up going with her grandparents – her mother’s parents – who have been looking for Callidora (Sophie’s given name) for seventeen years.

She meets her cousin Stephanie who tries to tell her that everything her father taught her might not be right and that she is not cursed.

The book jumps back and forth between Sophie’s life now and the story of Sophie’s parents and how everything went down between them and the early days of Sophie’s kidnapping.  Each chapter has the year at the top and the location and it is not difficult to figure out which time you are in by what is going on in the chapter.

This was a fascinating story – there was so much going on and so many characters to love (and hate).  You wanted Sophie to find her way, but didn’t want her to be forced into it (it seemed like this was happening in some scenes – her grandparents were rushing her to be “normal” at times) and eventually she did make a decision for herself on whether or not she could be with Damien, the boy she loved, or if he would also end up destroyed because of this curse that she has surrounding her.

I thought the ending was going to be a bit different than it was. I am happy with how it ended up (I don’t want to say much more than that) but I had a completely different idea of what I thought was going to end up happening!

Can a troubled young girl reenter society after living in isolation?When a beautiful 16-year-old girl named Sophie is found sequestered in a cage-like room in a rundown house in the desolate hills of Arbon Valley, Idaho, the entire community is shocked to learn she is the legendary Callidora–a baby girl who was kidnapped from her crib almost seventeen years ago and canonized in missing posters with portraits of what the fabled girl might resemble. Authorities soon learn that the cage was there to protect people from Sophie, because her biological father believes she is cursed.

Sophie is discovered after the man she knows as Papa, shoots and injures Damien, a young man who is trying to rescue her. Now, unsocialized and thrust into the world, and into a family she has never met, Sophie must decide whether she should accept her Papa’s claims that she is cursed and he was only trying to protect others, or trust the new people in her life who have their own agendas. Guided by a wise cousin, Sophie realizes that her most heartbreaking challenge is to decide if her love for Damien will destroy him like her Papa claims, or free her from past demons that haunt her mind.

Brenda Stanley is the former news anchor at her NBC affiliate KPVI in Eastern Iadho. Her writing has been recognized by the Scripps Howard Foundation, the Hearst Journalism Awards, the Idaho Press Club and the Society for Professional Journalists. She is a graduate of Dixie College in St. George, Utah, and the University of Utah in Salt Lake City. Brenda lived for two years in Ballard, Utah, within the Fort Duchesne reservation where the novel is set. She and her husband live on a small ranch near the Snake River with their horses and dogs.
The Color of Snow web site:
http://the-color-of-snow.blogspot.com/