June 6, 2012 by ConcertKatie No Comments 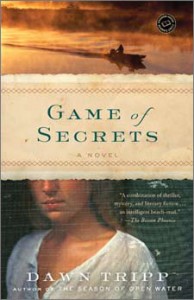 Game of Secrets is a book by Dawn Tripp.  At first I thought that this was going to be a bit of a murder mystery to try and find out who killed Jane’s father Luce.  It was not.  The book is written from several points of views and from different time periods.  For the most part the book is in the point of view of Jane and her daughter Marne. They have a bit of a struggling relationship. Luce and Huck also have a couple of chapters.  (Huck is Ada’s son.) The chapters also take you through time in the 50s, 60s and present day (2004).  It is easy to track along who is the narrator of each chapter and time the time period as it is always mentioned at the beginning of the chapter.

An additional character in this book is the game of Scrabble.  I’ve never read a book where there was an additional character of a game – but the Scrabble game gave you a bit of insight to the characters of Jane and Ada.  Ada is the mistress of Luce and it is believed that she had something to do with his death – yet Ada and Jane continue to have their Friday scrabble games throughout the book.  It is through the games where most of the information about Luce’s disappearance is revealed.

The book is set in New England – which is where I live – so it was easy to relate to the characters and where they were from.  It makes me wonder what kind of secrets are hiding in my small town.

Dawn created a music playlist that relates to the book Game of Secrets.  You can find out the music playlist Dawn selected for this book here: http://www.largeheartedboy.com/blog/archive/2011/07/book_notes_dawn_2.html

I received a free copy of this book in order to write this review. All opinions are mine and I was not otherwise compensated.

More about GAME OF SECRETS

In 1957, Jane Weld was eleven years old when her father Luce, a petty thief, disappeared. His skiff was found drifting near the marsh, empty except for his hunting coat and a box of shot-gun shells. No one in his small New England town knew for sure what happened until, three years later, his skull rolled out of a gravel bank by the river, a bullet hole in the temple. There were rumors he had been murdered by the jealous husband of his mistress, Ada Varick. Now, half a century later, Jane is still searching for the truth of her father’s death, a mystery made more urgent by the unexpected romance that her willful daughter, Marne, has struck up with one of Ada’s sons. As their love affair intensifies, Jane and Ada meet for a casual Friday board game that soon transforms into a cat-and-mouse game of words long left unspoken, dark secrets best left untold.