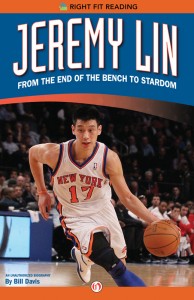 Those of you who follow Basketball or live in the New York Area might have heard about a little thing called “Linsanity” that has been taking over since February.  Point guard Jeremy Lin had a fantastic run for a few games – coming seemingly out of nowhere as the newest underdog that everyone loves.

Bill Davis does a great job giving the background on Jeremy Lin. How his parents met, how both of his parents supported him playing basketball growing up and his time in highschool in California.  It follows his career to Harvard and then getting chosen to play in the NBA – a dream of Jeremy’s since before he could remember.  He got traded from team to team before finally ending up as  a New York Knick and getting thrown in the game to see what would happen.  Each of the games that began the linsanity is recapped in this short 88 page biography.

Also touched on is Jeremy’s faith and how he remains the same guy and has not let the over night success story get to his head.  A great book for anyone looking to find out more about this underdog who is taking america by storm!

This true story is truly “Lin-sane!”
The world is exposed to an individual like Jeremy Lin only once in a generation. His journey has taken him from practicing lay-ups on the court at the local YMCA to hitting last minute game-winners on the grand stage at Madison Square Garden. This book charts Jeremy’s life story, from the streets of Palo Alto to the dormitories of Harvard to the major arenas throughout the country. Through exclusive interviews, play-by-plays, and colorful recollections, we get an intimate look at Jeremy’s story. It is one of unyielding determination, true faith, and unimaginable success.