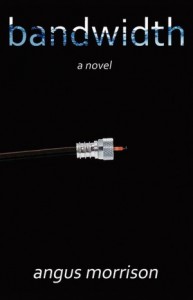 I picked this book solely based on the title, at first, hoping that it would in some way be technical. I’m not sure why I wanted to read something technical but I can’t tell you what possesses me to pick half the books I do to read.  After reading the synopsis of the book (which is provided below my review) I still seemed interested.

So, could I trust my gut on this one? Absolutely.  It wasn’t quite as technical as I thought it might be with a title like Bandwidth – but that was totally ok with me.  It is quite a thriller and an easy read (or was it easy simply because I flew through it because I could not wait to see what was going to happen on the next page?) and some chapters were only a page long! (I love those kinds of chapters.)

It is hard for me to  review thrillers because I don’t want to give anything away that might ruin your experience reading the book.  Let me just say there are a lot of characters to keep track of – but at the end it kind of gives you a “where are they now” so you won’t have to make up what happened to them. (Although sometimes making things up is more fun than what the author writes, but not in this case.)

I would definitely recommend this book to anyone who is looking for a great thriller that they can read over just a couple evenings or maybe on a Saturday.

I received a free e-copy of this book in order to write this review from the publisher through NetGalley.

Several years after the dot.com funeral pyre, Hayden Campbell – a former CIA operative turned speechwriter – finds himself working for the sixth richest man in the world, Aaron Cannondale. From his perch, Hayden watches as a Dutch student discovers a technology to send voice, video and data through Europe’s municipal water system. Standing in the way are European technocrats, the Russian mafia, a Swiss banker and a new breed of terrorist intent on wreaking havoc on the West.

Bandwidth
takes us from the stoops of Brooklyn, to Moscow and Zurich, to the bike paths of Amsterdam and the backrooms of Brussels and Frankfurt, to Afghanistan and the hazy diwans of Yemen.

Dazzled by his new boss but harboring a soft spot for the Agency, Hayden allows himself to be pulled back in for one more run — a run that reminds him that people aren’t what they seem, a run that reinforces his belief that greed has no sell by date.

Angus Morrison has been a Pulitzer-nominated financial journalist for Bloomberg News, and has written for The International Herald Tribune, The New York Observer and the Globalist. He has been a speechwriter for the U.S. Secretary of State and IBM’s senior executive suite, and has served as a Senior Policy Advisor at the U.S. State Department. He lives with his wife and son in Alexandria, Virginia.