Book Review: Don Kirshner: The Man with the Golden Ear

March 6, 2012 by ConcertKatie No Comments 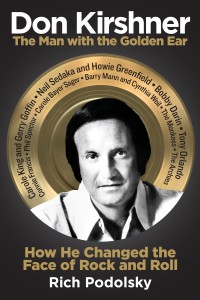 Don Kirshner, The Man with the Golden Ear is a biography on Don Kirshner and “How He Changed The Face of Rock and Roll” by Rich Podolsky.

In the beginning of the book, Rich talks about how he had always been fascinated with Don Kirshner and how he thought about how he could go about writing such a book.  He had started with a list of people he’d try to contact, but wasn’t sure he’d be able to talk to most of the major players in Don’s story.  However, after reading the book it seems like he did pretty well in getting almost everyone to agree to interviews – and made a lot of connections and friends along the way! (With the exception of Carole King, who rarely gives interviews.)

Don is credited as coining the term “demo” as a shortened version for the phrase “demonstration recordings” which was being used previously.  Don started out with his pal Bobby Darin, going door to door trying to sell songs and get Bobby a career.  Once Bobby’s career took off, he was forced to fire Don, but it gave Don a connection and ideas.  Most of the places that Don and Bobby went to didn’t care to look at young kids writing rock songs.  Don ended up starting his own company where he signed young writers and ended up with many, many hits over the years!

To name a few of the people he worked with – Carole King and Gerry Goffin, Barry Mann and Cynthia Weil (who actually co-wrote a song with Hanson for their debut album Middle of Nowhere – I Will Come To You)   Neil Sedaka and sometimes his writers teamed up with the legendary Leiber and Stoller.

He became quite the mogul and could have made a lot more money but at the time he did not realize how much there was to be made in royalties by his songs being played on Oldies stations, since those stations didn’t exist back then.

Kirshner is also credited with the early success of The Monkees, but they fired him because they wanted more control over what they were singing and playing.  Interestingly enough, they had several top 3 hits with Kirshner picking the songs, but once he was fired nothing above a top 3 ever again.  Hmm…

It was interesting to read a bit of behind the scenes of a bunch of songs that I am familiar with – Breaking Up Is Hard To Do, Stupid Cupid, The Locomotion, just to name a few, with a lot of first hand accounts from those who wrote it or from those who were around at the time.

In 1958, long before he created and hosted Don Kirshner’s Rock Concert, the most dynamic rock-and-roll series in television history, before he developed The Monkees and created The Archies, Don Kirshner was a 23-year-old kid with just a dream in his pocket. Five years later he was the prince of pop music. He did it by building Aldon Music, a song publishing firm, from scratch. This is about how he did it- with teenage discoveries Bobby Darin, Carole King, Neil Sedaka, and more.

By 1960, at the ripe old age of 25, Kirshner had built the most powerful publishing house in the business, leading Time magazine to call him “the Man with the Golden Ear.” In five short years he coaxed and guided his teenage prodigies to write more than 200 hits. And they weren’t just hits, as it turned out, but standards-including “On Broadway,” “Will You Love Me Tomorrow,” “Up on the Roof, Breaking Up Is Hard to Do,” “I Love How You Love Me,” “Who Put the Bomp,” and “The Locomotion”– songs that have become the soundtrack of a generation. “We weren’t trying to write standards,” said one songwriter. “We were just trying to please Donnie.”

RICH PODOLSKY (New York, NY), an established reporter and writer since the 1970s, has been a staff writer for CBS, and has written for TV Guide, ESPN, the Philadelphia Daily News, the Palm Beach Post, and the Wilmington News Journal. His passion for the music of the ’60s led him to Don Kirshner and the amazing teenage songwriters he discovered.