February 7, 2012 by ConcertKatie No Comments 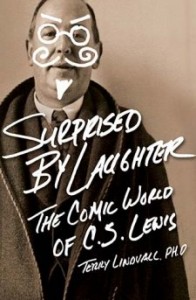 Surprised Laughter is by Terry Lindvall and is The Comic World of C.S. Lewis.  If you’re not familiar with C.S. Lewis, he is probably most known for writing the Narnia book series – The Lion The Witch and The Wardrobe, etc. As well as quite a few other books as well.  Once again, I dive into a biography of sorts about an author whos books I’ve never read. Although I have seen a movie version of The Lion, The Witch and The Wardrobe and I did have the series on a “wish list” for my Nook.  That has to count for something 😉

The book tells about the life of C.S. Lewis and how he used laughter in his book and in his life. The book is split up in to 5 or 6 sections and has something like 33 chapters.  Mixed in are quotes from Lewis himself – either from things he had said or things he had written which I found to be a nice touch.  Rather than just citing “oh he talked about this in this book”, they actually have the excerpt there for you to read.

The book is pretty big – over 400 pages – so it took me about 3 days to make my way through it. (And totally killed the book a day average I had going on. Oh well!) But it is definitely an interesting read – Lewis was Christian (no surprise as this is a Thomas Nelson book) but he didn’t take his religion so seriously – there are chapters on his “vulgar” humor and his thoughts on laughter in relation to religion as well. Oh! and I will warn you. The beginning was a bit boring and tough to get in to – but do not let that deter you from reading the rest of the book.  Once things get going it becomes a worthwhile read!

Surprised by Laughter looks at the career and writings of C. S. Lewis and discovers a man whose life and beliefs were sustained by joy and humor.

All of his life, C. S. Lewis possessed a spirit of individuality. An atheist from childhood, he became a Christian as an adult and eventually knew international acclaim as a respected theologian. He was known worldwide for his works of fiction, especially the Chronicles of Narnia; and for his books on life and faith, including Mere Christianity, A Grief Observed, and Surprised by Joy. But perhaps the most visible difference in his life was his abiding sense of humor. It was through this humor that he often reached his readers and listeners, allowing him to effectively touch so many lives.

Terry Lindvall takes an in-depth look at Lewis’s joyful approach toward living, dividing his study of C. S. Lewis’s wit into the four origins of laughter in Uncle Screwtape’s eleventh letter to a junior devil in Lewis’s The Screwtape Letters: joy, fun, the joke proper, and flippancy. Lindvall writes, “One bright and compelling feature we can see, sparking in his sunlight and dancing in his moonlight, is laughter. Yet it is not too large to see at once because it inhabited all Lewis was and did.”

Surprised by Laughter reveals a Lewis who enjoyed the gift of laughter, and who willingly shared that gift with others in order to spread his faith.