Book Review: A Stranger at Home: A True Story

February 12, 2012 by ConcertKatie No Comments 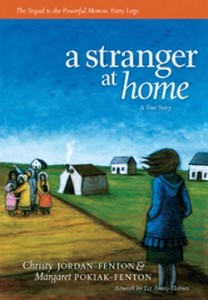 A Stranger At Home: A True Story is about Margaret (Olemaun) Pokiak.  She is sent off to school for 2 years with nuns and this is the story of her return home.  While at school, Margaret learns to read and write and speak english.  Once she gets home, she realizes that she has forgotten her native Inuit language.  Her mother doesn’t recognize her after she was forced to cut her hair and doesn’t speak Inuit any longer.  She is upset that Margaret is now accustomed  to “outsider” food and not the typical meals that her mother serves.

Margaret’s father understands what she is going through and acts as a translator for her.  They work on building a cabin together and he starts out speaking English with some Inuit, then Inuit with some english and by the time they are done, they are speaking just Inuit.  Margaret gets picked on by some of the other local kids that didn’t go to school with her, and her only friend from school, Agnes, isn’t allowed to see her because her mother feels she is now a bad influence because she speaks English.

I actually chose this book by accident, but I am glad that I did end up reading it.  It was a short book with some great illustrations Liz Amini-Holmes.  At the end of the book there are some real photographs of Margaret’s family and home as well as some of what the inside of their home might have looked like. It was interesting to learn about a different culture and a different way of life.

I received a copy of this book for free through NetGalley and Annick Press. I was not asked to write a positive review, all thoughts and opinions are mine.  I was not otherwise compensated.

The sequel to the unforgettable memoir FATTY LEGS.

Traveling to be reunited with her family in the arctic, 10-year-old Margaret Pokiak can hardly contain her excitement. It’s been two years since her parents delivered her to the school run by the dark-cloaked nuns and brothers.

Coming ashore, Margaret spots her family, but her mother barely recognizes her, screaming, “Not my girl.” Margaret realizes she is now marked as an outsider.

And Margaret is an outsider: she has forgotten the language and stories of her people, and she can’t even stomach the food her mother prepares.

However, Margaret gradually relearns her language and her family’s way of living. Along the way, she discovers how important it is to remain true to the ways of her people – and to herself.

Highlighted by archival photos and striking artwork, this first-person account of a young girl’s struggle to find her place will inspire young readers to ask what it means to belong.