Tuesday night Andy Grammer’s 2012 Tour came to Ridgefield, CT and the Ridgefield Playhouse.  The show started at 8 and ended a little after 11.  For this show, TopBlip.com had a contest for an additional opening act for the show.  Robery Gillies from Scotland (though more recently, MA) was the winner and did 3 songs to kick off the show.  He was good and by good I mean adorable (and good).

Next up was Action Item which was a big part of the reason why I went to the show (and the only reason Christine and Laura went haha).  They started their set with their new song Against The World – which I’ve been totally out of the loop and unable to listen to ahead of time. But of course it was a good song.  Their set consisted of 6 songs and of course the drumline.  After their set we went out in the lobby to meet them (even though I had bought a shirt so I would have a M&G with them after the show) but only Brian and Anthony were out there.  We got pics with both of them and then Ryan Star was set to hit the stage so they left, Christine and Laura left and I went back down to my seat!

The last time I saw Ryan Star I was absolutely miserable at the David Cook show at Toad’s where security were butts to me.  So I was glad to get to see him and actually be in a good mood and actually get to enjoy him.  He did a 9 song set and at one point had 2 or 3 girls up on stage to play tambourine with him.  He puts on a really good show, playing guitar and keyboard and he really had the crowd under his control.  Once his set was over he jumped off the stage right in front of where I was sitting (practically landing in the chair that Christine had been sitting in which I had debated moving to – good thing I didn’t!)

Then it was time for  Andy!  It seemed like it took forever for them to get everything set up – probably because I was so anxious.  He came out and started his set with his latest single – Fine By Me.  I’ve yet to hear this on the radio and I had bought his album on iTunes to listen to in order to be ready for the show and then… never found the time to listen to it.  (I bought another copy after the show and have been listening to it non stop now though!)  His second song he said was about how when musicians are feeling it they are said to be “in the pocket”.  He told little stories before a lot of his songs which was nice.  Ladies he wrote about his mom.  Miss Me was written for a bunch of his friends who went through breakups and all were saying “she’s going to miss me!”.  Build Me A Girl he said started out kind of douchey but they worked with the story line for it and made it a bit different than the original concept.   Amazing is a song that does well on youtube but he didn’t put it on the album.  Slow is a song about when guys in a relationship say that they should slow down because they dont really like the girl – but if you do like her – then speed it up!  He laughed a bit here because I guess someone made a comment about  how it could be taken a different way.  During this song he also jumped off the stage (right in front of me) and went through the crowd. He even went up to the balcony! When he came back down he threw in some of Airplanes and then Ready or Not. (The Fugees! Such a throwback song.)   He said that everyone in Biggest Man In Los Angeles were real people that he wrote about – even the monkey who was his homeboy.  Lunatic he said was about how being a street performer you think you’re crazy and you meet a lot of people who are homeless and really ARE crazy. This is also when he encouraged everyone to do whatever they want – as long as you go for it you can do anything, but it might be hard so just stick with it. Before You Should Know Better he warned that if you’re dating a musician to watch out because there would be songs written about you to live forever on their albums and this one he wrote right in front of the girlfriend as she was doing something he didn’t like.   The Heavy and the Slow he said was about how his mom died when he was 25 and before then he thought he had compassion but he realized that he didn’t and how sometimes in life in order to learn things you have to go through some shit first.  He recorded an acoustic album and this song is on it and it will be coming out soon. He also said he was supposed to come up with a name for it today but hadn’t.  He didn’t talk much about love love love that I recall, but he did have us sing the love love love part.  And he finished his set with Keep Your Head Up.

Quickly after he left the stage he and his band came back for an encore and he encouraged us all to sing a long with it.  He did a cover of Rihanna’s we found love.

I headed back to the lobby and Action Item was hanging around chatting. I hung back because it was a bit chaotic and knew I’d have my group photo M&G soon.  Mark saw me off to the side and came over and gave me a hug and said hello and once David saw Mark with me, he came over to chat as well.  Then it was time for the group photos, which is unfortunately missing Anthony 🙁 But I got a picture with him earlier and have a group photo already with all 5 of them so it wasn’t too bad.

Then they announced Andy would be coming out. I debated hanging around for him and ultimately decided – if I went to use the restrooms and he was out signing once I was done, then I would hang around.  He was out there and the line moved pretty fast so I bought a CD for him to sign and got a photo with him. 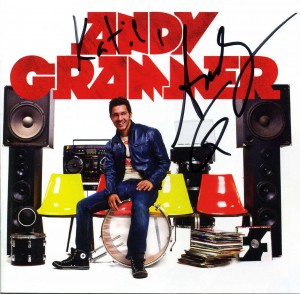 I am completely exhausted now (Wednesday morning – I write these posts in advance! shh!) after getting home at around 1am and then staying up to attempt to catch up on some TV. (I am so behind and so glad I don’t have plans for the weekend so I can catch up on everything I’ve been missing out on!)

City Man
Free Fallin’
You Are Who You Are