December 30, 2011 by ConcertKatie No Comments 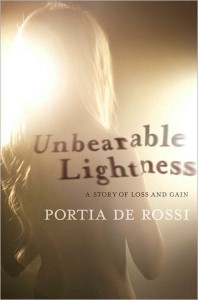 Recently I read Unbearable Lightness: A Story of Loss and Gain by Portia de Rossi.  Ellen had really been pimping this book out on her show when I was watching it last season, so I figured I’d pick myself up a copy and give it a read.

It is the story of Portia de Rossi and her struggles with eating disorders and dealing with being homosexual.  She started her career as a young girl, in modeling.  Her battle with anorexia began when she believed she was too fat and was trying to keep herself thin for modeling jobs.  Once the job was done, she would go on a binge eating McDonalds and then crash diet again a few days before her next shoot.  This worked fine for a while, but once she started booking gig after gig she didn’t have the time to binge and crash diet.

She speaks of her diet and how she went to see someone to help her eat healthy.  She would then take the amount of calories she was told to eat, and eat even less than that to lose weight.  Her family started to notice that she was way to skinny, but Portia still believed she had more weight to lose.

Throughout the book she talks about how she had to hide that she was a lesbian and was always paranoid someone would figure it out based on where she was hanging out or where she bought her morning coffee.  There are mentions of Ellen throughout the book and Portia having read a book by Ellen’s mother.  So it was kind of interesting that in the end she ended up married to Ellen 🙂  I also liked the story that she told about how they met and Ellen wanted her to come over and hang out, so she invited a bunch of other people too so it would be like a party… but she only put it together to spend time with Portia – who decided she didn’t want to go!

The story is good proof that no matter how perfect of beautiful someone on TV may be – they are still human and still have their own struggles to deal with. I am glad that Portia has overcome hers and found happiness.

I was not asked to write a review of this book, nor did I receive a free copy in order to write the review.