November 10, 2011 by ConcertKatie No Comments 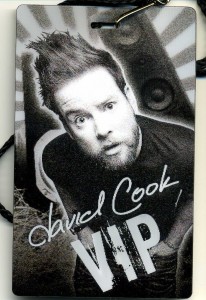 A couple of months ago I got an email that David Cook would be touring with Gavin DeGraw.  The closest they were coming to me was York, PA, about 5 hours away – but it was on a Saturday.  David was also doing a VIP package which included a M&G. (As well as access to sound check, a Tshirt and signed photo).  When I clicked the link in the email I saw that ticket were already on sale so in a panic I ordered a VIP package and ended up with Pitt tickets, but I wasn’t sure if it was first or second row.  Either way, I figured first or second row + VIP perks would be worth the trip!

A couple days before the show I got an email that I needed to be in PA by 2:45pm! It ruined my plans to sleep in because I needed to give myself a couple of hours buffer just in case I ran in to traffic.  I left the house at 8am and only ended up hitting about 30 minutes of traffic and was able to nap in the car for about an hour before I had to get ready for everything.

I picked up my ticket and it was FRONT ROW! And then waited in the lobby for the others with VIP until it was time to do our thing.  Wade from Ground Ctrl came by and said we’d be getting our laminates and then going to soundcheck.  It took what seemed like forever to check everyone in (125 people!) and then we headed down to the theater where David was already doing soundcheck.  When I walked in he was covering Billy Joel’s Moving Out. Then he asked if we wanted some FogHat and they did Slow Ride.  He finished his soundcheck by singing Goodbye To The Girl and told us that we’d have to leave (the 3 songs was such a tease!) to do the M&G. 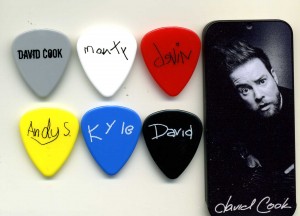 We all went back upstairs and waited in line for another really long time.  (Actually, I didn’t really wait in line I sat – big thanks to my new friends Mary Ann and Debbie who held my spot for me!)  Finally we were let in the room for the M&G and when we were about 4 people from the front the band decided they needed a potty break.  David had been given what I believe to be vodka? But it was in a trick package so he’d have to figure out a puzzle before he could open it.  Someone teased that didn’t he used to be a bartender? And he said yeah.. but where do you think it was? The Magic House? lol

Then the band came back and pictures resumed, until he decided the Queen song playing was unknown and sounded like a sitcom theme song and ran over to the iPod to switch up the playlist! (Then we realized it was not taking so long because the fans were dilly dallying – it was David running around that made the wait so long!) 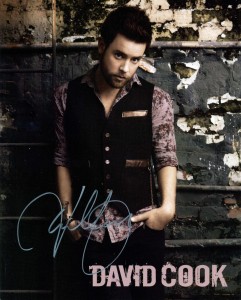 I told David about my suit with Toad’s Place about what happened at his concert in 2009 and he said he was sorry that it happened, but “good for you” that I did something about it and that they are actually going to be putting handicapped measures in place and he gave me a big hug and again said he was sorry and I said not to be because we helped a lot of people because of it.