October 9, 2011 by ConcertKatie No Comments 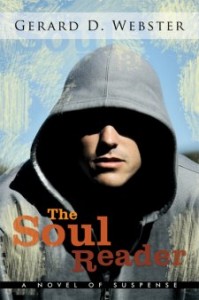 I thought this book was great.  Apparently it is a sequel, but I didn’t realize that until I had went over to Amazon to review the book there.  I didn’t feel like I was missing out on anything by not having read the book previous to this one.  Ward and Carrie are writing a book together (it is Carrie’s, but she ask’s Ward for help) about some bad things that have gone down.  3 men were killed and all were thought to be accidents, however, Ward and Carrie believe there is something else behind it and they were just made to look like accidents.  The two enlist the help of some others as well and try to crack the case on the Culbera.

There is some drama when Ward reveals to Carrie that he can see people’s souls (hence the title, The Soul Reader) about 3/4 of the way through the book.  He doesn’t like one of the men that she has aligned herself with and thinks he is evil.  Carrie thinks that Ward may just be jealous (as they used to date, but are currently exes) and doesn’t feel threatened at all when this guy asks to meet her on his yacht.  Was Ward right about being able to read people at such an intimate level? You’ll have to read The Soul Reader to find out.

Although the book has 40+ chapters, I managed to read it in just one day.  I was riveted to this murder mystery and could not put it down!! I think anyone who enjoys a good mystery novel will really enjoy this book.  Also – I usually can figure out what the heck is going on in these type stories early on.  NOT the case with this book! It kept me completely in shock with every plot twist and turn.

In The Soul Reader, Ward McNulty is a man torn between seeking justice or forgiveness. It is in discovering the true identity of his father’s murderer while protecting the woman that he loves that he finds both.