September 10, 2011 by ConcertKatie No Comments 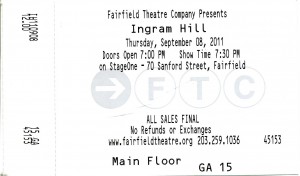 Ingram Hill FINALLY returned to Connecticut on Thursday night.  The last time we saw them in CT was 2005, so it was definitely a LONG overdue visit!  The show was at the Fairfield Theater, who sent out an email saying there was no opening act and that Ingram Hill would be going on at 7:30.  We were pleasantly surprised once we arrived that not only was there going to be an opening act – there was actually going to be TWO.  Tickets were general admission, but the seats were all still there so it was just like any other show I’ve seen there (although perhaps a bit cheaper!)

First up was Sarah Jane Wilson (http://www.facebook.com/sarahjanewilsonmusic) who did about 5 songs, one of which being a Taylor Swift cover.  She just recently released an EP titled “Middle of Nowhere” (now where have I heard that name before…)

Next up was Kat McGivern (http://www.facebook.com/KatMcGivernMusic) who also did a handful of songs and a decent amount of the crowd seemed to be there for her! (There were only about 25 people there and I would say about 1/5 left once her set was over!)  During her set I definitely thought she reminded me of the lead singer from the Cranberries, so it is really no surprise that now reading her bio that they are listed as an influence.  You can definitely tell that in several of her songs.  She is currently working on a dance pop album – tentatively titled “candy pop” (at least, I think that is what she said)

Then it was time for Ingram Hill!  I haven’t exactly kept up with them over the past few years when they haven’t been touring around here so I definitely need to work on that now and figure out which albums I don’t have (I am thinking I am something like three behind… though one may just be an acoustic ep.  I’ll figure it out eventually)  Of the setlist, there were maybe 6 songs I had recognized from the albums I did have.  Also, since I had seen them last 2 of the band members had changed!  Although I had read about that so it was not a total surprise.

Justin was also quite chatty and was cracking us up.  After a couple of songs he asked how we were doing and the response was a little bit blah.  He told us that he would ask us again later, but would warn us that he was going to ask us so that we’d know what was going on and have time to respond.  When he asked again much later how we were doing, there was a lot more yelling and clapping.  Then he said how he realized that if the answer is “yes” or “good” it can easily be replaced with “woooooo!” but if the answer is “no”, then “no” is still acceptable.  For instance – if someone asked “Do you like brussel sprouts?” you’d yell “NO!” and then if someone asked “Do you like Ice Cream?” you could say “WOOOOOOO!” and it would get the point across.  He also mentioned how at a recent show a group of guys just said “yep” when he asked if everyone was doing all right.

Another point during the show he was talking about the merch that they had and that they also had free matches and how you could never have enough matches around, especially if you had kids.  He also was talking about how the shirts were cotton and they would feel good against your body but they would also make you look good so if you liked to look good and feel good at the same time you should buy one…   And when a fan in the front requested Almost Perfect, he said that they didn’t know that song and that she must have had them confused with someone else – but they did end up singing it. I’m not sure if he was trying to be stealth and make her think they weren’t going to end up singing it, or what! haha.


I wasn’t able to hang out after the show because I am old and had to get back home to get some sleep in so I wouldn’t be a total zombie at work, but other than that it was a great night and it was great to see the old crew who used to go to Ingram Hill shows all the time back together again 🙂