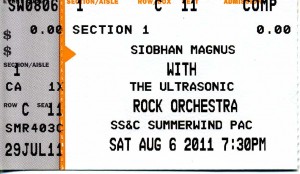 Saturday night Siobhan Magnus of American Idol fame kicked off the season at Summer Winds PAC in Windsor, CT. I had never been to this venue before – it is right in the middle of a lot of corporate buildings. We tried to find a spot to stop and eat before the show but the GPS led us to a McDonalds that was non existent (perhaps in one of the buildings) and a Dunkin Donuts that was only open M-F.

The show kicked off at 7:30pm with Siobhan doing a solo set that lasted about an hour. She did 4 original songs that will be on her album coming out in the next few months – Beatrice Dreams (the first single), Hollywood Carousel, Black Doll and Escape Goat. The venue was a giant tent with lawn in the back and she told those out on the lawn to move forward, especially since the forecast was saying there would be some thunderstorms. She also sang many covers and covered many genres which shows just how versatile her voice is. She did songs from Stevie Nicks to Hanson to Oasis to Jackson 5 and more. Just before he set was to end, the rain started. She told us that she would be back singing with the Ultrasonic Rock Orchestra.

After a half an hour intermission, the rain really started to come down (and the rain was collecting on the top of the merchandise and guest services tents as well as on the tent over the stage!) and the Ultrasonic Rock Orchestra took the stage. They put on a great show and did songs from The Who, The Beatles, Queen, David Bowie, and more. They rotated who sang lead on songs and had plenty of voices to choose from in the band (I think there were something like 9 different singers throughout the night – including Siobhan!) Their set ended just after 10pm and the rain was fortunately just a slight drizzle as we walked back to the car.

I bought myself a new camera for my birthday – so my recent concerts (Jonny Lang, The Voice, and Siobhan) have all been taken with the new camera. So far I love it – and can’t wait to learn some more tricks with it to get even better photos ☺ It has a massive zoom which I used for just one photo of Siobhan – since we were 3rd row the full extended zoom wasn’t really needed for most of the show.


Setlist under the cut!

Living For The City/Think
The Chain