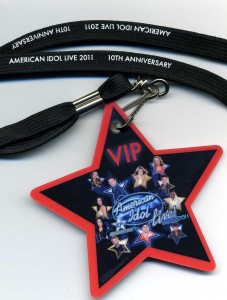 Thursday night it was time for my American Idol VIP Experience.  I wasn’t entirely sure what to expect because I had not been able to find too many reviews of how other peoples M&Gs went.  All I knew was that first there were group photos and then you had time to get solo photos with the Idols.  I basically only wanted a photo with Stefano and anything beyond that would be a bonus.

When I arrived at the venue it was raining and quite a crowd had already formed.  Some had other M&G passes which would allow them the “sign and slide” where they get a photo signed and don’t have much time to talk to the idols.  We were let in and put in groups of 10-15 for the group photo with 10 of the Idols (Thia was not there. Not sure why) and then we moved off to the side until everyone got their group photos.

For the group picture, we were near Lauren who warned us her hair might look bad in the back.  I told her our hair probably wasn’t much better since we were out in the rain! Then she went on about how she woke up at 3:30 because she had overslept and had a M&G at 4 and still had to go to hair and makeup!

I met up with a facebook friend, Miriam, and we had our game plan down.  She wanted photos with Pia, Lauren and Haley.  I wanted photos with Stefano (and Haley).  We decided we would get those done first and then whoever was still around if we still had time we’d hit up next.  We went to Haley first, she had a crowd, so we waited our turn… for a little bit Stefano had no one with him while we were waiting for Haley 🙁  He wasn’t talking much because he was sick and I knew if I went to talk to him it probably wouldn’t have ended well haha.  So we got our photos with Haley, then went to Stefano.  Somehow my camera went on video mode so I was standing next to him for the longest time while Miriam was trying to figure out why the camera wasn’t working.  Finally I fixed it and got my photo with him.   We bounced all around trying to see who had the shorter lines.  We went to Pia next and then waited for Lauren (I think she and James had the longest lines)  I can’t exactly remember the order but after we hit up our “priority list” we got pics with Paul (and I talked w/ him a bit about Hanson since his fiance is a fan – he said he knew them and they were good guys) and we decided we’d try for Scotty – except we didn’t know where he was!  Someone overheard me say I had no idea where Scotty was and directed us down the hall where Scotty’s mom took our photo with him!  He’s so adorable in person.  We hit up Jacob.. and looked for Naima but it seemed like she had left! (Earlier Pia, Jacob and Naima were all near each other)  Stefano also looked like he was gone at this point… Casey had a short line so we went by him and were told he had to leave, but then someone yelled “TWO MINUTE WARNING”, so we were able to get a photo with him. After that we hopped in line for James since he was the only one left.  We got to the front of his table but as soon as we got up to the front time was up and he had to leave! Argh! So close.

Overall, we did really well with getting photos!  There was no way we could have gotten Thia, Naima left or we probably could have gotten her when we went back over to get Jacob… and James was just a bit too popular for us.  Apparently some people did manage to get photos with everyone and I have to commend them for that because it was not easy!

We also got a photo that everyone had previously signed for us with instructions on how to get our group photo.

Personally I probably would have removed the group photo aspect of it and allowed us more time to just mingle with the idols – without the group photo (which was hard to get near whoever you like anyway since there were 11 idols and 10-15 fans) we would have absolutely had the time to get photos with everyone individually – and probably then some.

But I would have to say that the $250 for the VIP Package was certainly worth it.