Book Review: The boy who came back from heaven by Kevin & Alex Malarkey 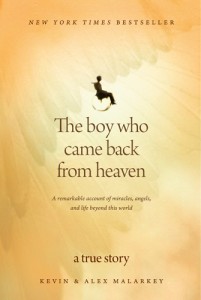 I was drawn to this book because I had thought that I saw the boy this book is about on the news.  However, when the book arrived I realized that it was actually a different story that I had seen on the news and the fact that there are now (at least) 2 boys who are claiming to have met God… is pretty fascinating in and of itself.

This book was a quick and easy read and was incredibly interesting.  It is roughly 200 pages and I finished it in 1 sitting in about 2 hours.

The book tells the story from the perspectives of Kevin and Alex Malarkey.  When Alex was 6, he and his father get in to a terrible auto accident and many believed that Alex had died.  However, paramedics heard a slight heartbeat and he was helicoptered away to a Children’s Hospital while Kevin was taken to a nearby hospital to be checked out.

Kevin was actually on the phone with his wife at the time of the crash, who was home with their 3 children – one of which who had been born just 2 days previous!  Fortunately, she assumed that he was just in an area without much reception and did not hear the crash occurring.

Each chapter we hear Kevin’s perspective and at the end, Alex tells what he was going through at the time.  He tells about how he went to Heaven but could not see God’s face because if you see his face, you die.  He tells about Jesus being with him as he watched what was going on at the accident scene.  He tells about how angels removed Kevin from the car during the accident and how the devil told him that the accident was his fault. Alex tries to describe Heaven to the best of his abilities – but it seems like it is more of a “you have to see it to believe it” type of place.  All of this time, Alex’s Army were praying for him as Alex was in a coma and was internally decapitated.

The story is truly captivating and amazing. Inserted in to each chapter are also a few paragraphs from people who were at the scene of the accident, who were praying for Alex or attended his church,etc with their thoughts on everything that was going on.

(For anyone interested – the other boy has also written a book which is called “Heaven Is For Real” I have not read it yet but it would be interesting to see how his descriptions of Heaven are similar/different to Alex’s!)

I received a free copy of this book from Tyndale Publisher’s in order to write this review.