'THE VOICE' LIVE ON TOUR 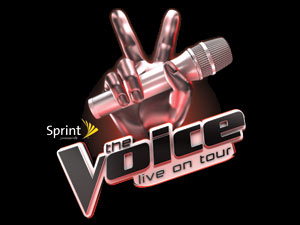 As announced last night on the top-rated new television show, “The Voice,” the final eight contestants from the smash hit program will hit the road for Sprint presents “The Voice” Live On Tour. The Live Nation-promoted tour has confirmed six shows beginning July 27th at the Gibson Amphitheatre in Los Angeles, with stops in Las Vegas, New York, Chicago, Boston and Wallingford.

The show’s innovative format features three stages of competition: the first begins with the blind audition, then the competition enters into a battle phase, and finally, the live performance. The show’s casting team is working with the music industry and searching the country for the best singers to bring to the blind audition process. During the blind auditions, the decisions from the coaches are based solely on voice and not on looks. The coaches hear the contestants perform, but they don’t get to see them – thanks to rotating chairs. If a coach is impressed by a contestant’s voice, he/she pushes a button to select the contestant. At this point, the coach’s chair will swivel to face the contestant selected. If more than one coach selects the talent, the power shifts to the contestant, who may choose which coach they want to work with throughout the competition.

Once the teams are set, the battle is on. Coaches will dedicate themselves to developing their singers, giving them advice, and sharing the secrets of their success. During the battle rounds the coaches will pit two of their own team members against each other to sing the same song together in front of a studio audience. After the vocal face-off, the coach must choose which singers will advance.

At the end of the battle episodes, only the strongest members of each coach’s roster remain and proceed to the live stage shows. In this final performance phase of the competition, the top contestants from each team will compete against each other during a live broadcast. The television audience will vote to save one contestant on each team, leaving the coach to decide live who they want to save and who will not move on. At last, each coach will have his/her best contestant left standing to compete in the finale. From these four, one will be named “The Voice” – and will receive the grand prize of a recording contract and $100,000.