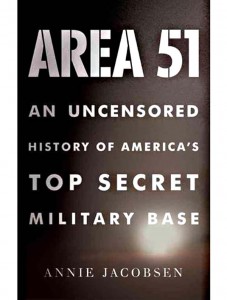 Since I was young, I’ve always been interested in outer space, the solar system and of course aliens.  When I saw that I could have the opportunity to review Area 51, I of course jumped at it!  When the book arrived in the mail – I was shocked at its size.  It is 500+ pages and jam packed with secrets and stories from people who worked at Area 51 over the years.  Annie decided to write this book when her husband’s uncle’s wife’s sister’s husband (you follow?) said that he had a good story for her.  She was always under the impression that he had worked designing airplane parts, but he actually worked as a physicist and played a major role in developing aerial espionage for the CIA!  He had to keep this information secret for 50 years, but in 2007 the CIA had just declassified it so he was able to talk about it.  Once she found out that Area 51 was real she was on a mission and talked to many, many people who shared their Area 51 stories.

Area 51 is An Uncensored History of America’s Top Secret Military base.  It contains 21 chapters, all of which explain in depth some of the different projects that were going on there.  It touches on the conspiracy theory that the moon landing never happened and that it was all orchestrated at Area 51 and also of course about the aliens landing in Roswell.  It also has 2 sections of black and white photos – some of which were never before published.  It is definitely a very interesting read and I would recommend it for anyone who is interested in learning more about the secrets of Area 51, space exploration, etc.  The stories were very interesting to me and kept me hooked on this book (in fact, I read it in 3 sitting which is a bit of a record for me considering its size!) and wanting to finish it.

This book can be purchased (and previewed!) at  Amazon.com

I was given a free copy of this book to review from Little, Brown.  All thoughts and opinions are my own and I was not compensated in any way for this post.

« Previous post
Book Review & Giveaway: Where Will You Go From Here? by Valorie Burton
Next post »
dearphotograph.com