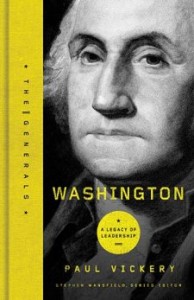 Washington A Legacy of Leadership by Paul Vickery and Stephen Mansfield is part of Thomas Nelsons “The Generals” series.  If there was ever anything you wanted to know about the life and times of George Washington, chances are it is mentioned in this book.

His genius lay not only in becoming “The Father of Our Country,” but also in building the army that made our independence possible. Literally within sight of the enemy, this largely self taught soldier developed the foundational principles upon which our own modern army is built. These lessons did not come easily. For every victory at Boston, there was a defeat on Long Island. For every brilliant tactical move like Trenton, there was a disaster like Brandywine. But in the midst of both failure and success, he earned the devotion of his troops and the love of a budding nation.

History is not one of my strong suits, or one of my favorite subjects, but this book seemed like it might be interesting.  It took me a while to get through, as it is jam packed with tons of information and to me, wasn’t really written in a way that made me want to keep reading – to me it kind of read like an essay… which I generally do not read for fun.  However, if you are a history buff then I would definitely recommend this book – there are details from letters that George wrote home to Martha and if Early American History is your thing, I think you would have no problem diving right in to this book.

Although Thomas Nelson is generally known for its religious content, this book is not overly religious.  While George was Catholic, it is not a main focus of the book and is only included when needed for the story.