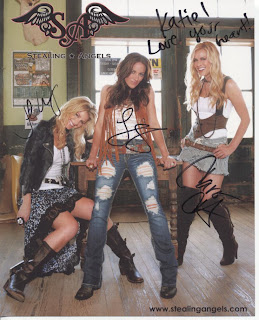 Yesterday Stealing Angels performed at Country 92.5’s Dunkin Donuts Music Lounge.  The group is made up of Tayla Lynn, Jennifer Wayne and Caroline Cutbirth.   While Jennifer and Caroline had known each other for a while, they met Tayla when they were going to do a reality show together.  The reality show would follow the lives of descendants of famous relatives. Tayla is the grand daughter of Loretta Lynn, Jennifer Wayne the grand daughter of John Wayne and Caroline Cutbirth, a descendant of Daniel Boone.

They played 5 songs for the small crowd at the music lounge and were very high energy.  You could tell that they had a lot of fun on stage and at points were laughing so much they couldn’t sing their lines! After the set Bosh and Cory did a bit of a Q&A with them, asking how they got their name, how long they had been a band to help us get to know them a little bit better.  Then it was time for autographs and photographs.  The girls were all very happy we had come out to see them and were so sweet and so beautiful!

You can find out more about the band and hear their single “Paper Heart” at www.stealingangels.com!

A few more photos and the setlist under the cut!

Married, Single
Girls Gotcha Back
Paper Heart
Not sure the title – it had the line “the only light on this road is the moon” in it though…
Lightning In a Bottle