Book Review: The Band that Played On by Steve Turner

April 7, 2011 by ConcertKatie No Comments 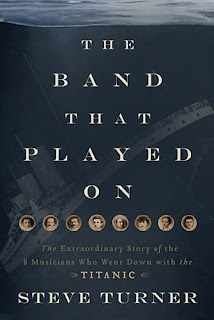 Outside historians, the public is aware of the Titanic musicians thanks to two popular movies, Titanic, and A Night To Remember.  Both of these films make a point to show the musicians performing until the very end as they went down with the great ship.  Little has been knock about these musicians, and although volumes have been written about the Titanic, the band has not been the subject of any one book.
The Band That Played On: The extraordinary Story of the 8 Musicians Who Went Down with the Titanic by Steve Turner, is the first book to focus solely on this little known-aspect of Titanic history.  Turner addresses the many questions left unexplored, including: Who were these men? What were their values and beliefs? What compelled them to come back on deck after retiring for the evening? As bandmaster, did Wallace Hartley play a vital role?

The first couple of chapters give a lot of background information and if you are not interested in the historical aspect of the book, it might be hard to get into. However, I urge you to continue because the stories of these 8 men are fascinating.

It also details what songs they played as the boat went down – from jazz to ragtime to hymns (based on the recollection of survivors) and Nearer, My God to Thee as the water was up to the band’s knees.  The final chapters tell a bit about what ended up with the families of the band members, which are also some interesting stories.

Also included in the book are photos mixed in to all the chapters.  There are photos of artifacts, photos of the men in the band and their homes.  I found these photos really helpful in picturing the times in which these men lived and they really added a lot to the reading experience.

The Publication of the book Marks the May 2011 Centenary of the Launch of the RMS Titanic in Belfast, Northern Ireland.


I received an advanced copy of this book from Thomas Nelson to post a review.  All the thoughts of the book are my own and I was not compensated to give the book a favorable review.