February 21, 2011 by ConcertKatie No Comments 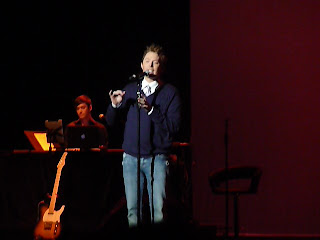 Last night Clay Aiken brought his Tried & True tour to The Palace Theater in Waterbury, CT. I have to say, his concert was a lot of fun. I never realized how funny he was – a couple of times he had me laughing so hard I was near tears.

He started the show off with the theme from Love Story and then went into Mack The Knife.  Then he chatted a bit with the crowd and was incredibly confused with the setlist that he had in front of him.  He also mentioned that he sounded like a man for the first time in his life – and when that brought on cheers he said to watch out because he might have to cut the show short because it depended on him being an alto! 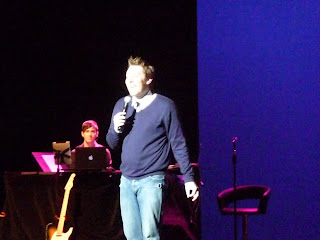 He then went into A Kind of a Hush, What Kind of a Fool Am I, and Breaking Up Is Hard To Do.  He chatted about how a fan in a M&G had mentioned that he should sing Invisible, but he didn’t think that it would fit into the jazzy feel that he was doing with this tour.  Then he went into a medley of his songs in the jazzy feel and told us to boo if we didn’t like it because it was a new addition to the show for that night. He did about 6 snippits of his songs and they sounded good – with the exception of Invisible which some how came off even more creepy than it already was 😉

He took a couple of breaks and his back up singer Quiana came out to center stage sing – she did A Rainy Day In Londontown and Cry Me A River. 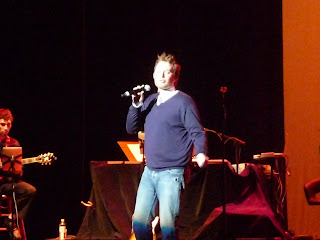 Clay talked a bit about how way back when, artists would have their whole band with them in the studio and they would run through the songs and if they screwed up, they would have to start the song all over.  Now with recording advancements, artists simply have to talk and the producer does all of the work to make it sound good.  He did a bit of Suspicious Minds with autotune and joked about how perhaps that is what he should do to get himself back on the radio.  Then he explained that each night the band chose a song for him to do.  He was not prepped ahead of time but they hand him the lyrics and he reads it.  For last night’s show the song was “I Kissed a Girl” which he said was ironic. 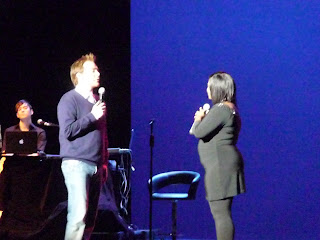 After performing Moon River, he wanted to showcase how talented the band was and said that he would do Who’s Sorry Now in a style that was yelled out from the crowd.  The first suggestion was Irish – although he seemed to have a bit of a Scottish accent when singing it, but the band had no problem making the song sound Irish.  The next suggestion was for Hip Hop which he said he would have Quiana do.  The final suggestion was Grunge… which had Clay screaming “WHO’S SORRY NOWWW” into the mic and Quiana got so into it she started squatting and screaming and Clay thought maybe she was having a bathroom accident.

He ended the set with Unchained Melody and said it is his mother’s favorite song and he used to sing it anywhere as long as someone paid him a quarter.  Then the curtain went down, but the lights never went on – so we knew there would be an encore coming. (Well, everyone didn’t know – some tried leaving)

Clay came out and did Both Sides Now And then talked a bit about how there were a lot of people on their phones letting other people listen in (for a “free concert”) and people taking video and posting it on the internet.  He also mentioned how people at home post on message boards everything that is happening as it is happening and said how when he told the woman in the balcony he would kiss her if she jumped down on to the stage and she said no – she became a celebrity on the message boards and that someone would have responded “I would have jumped off a roof!”  At first this bothered him, but then he realized that people are still coming to his shows so he now embraces the photos and the videos and the phone calls.  He ended the show with “In My Life” 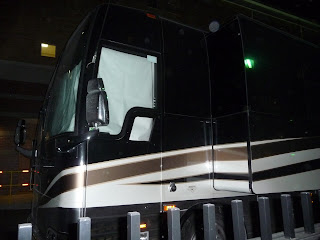 Then, Christine and I, who had a weekend of poor life decisions made another poor decision when we decided to go to the bus because we wanted to meet Adam, Clay’s cute guitarist.  Well, we did meet Adam (and Jerome, Clay’s bodyguard was teaching him how to do handshakes with everyone in line!) and then we decided – what the heck! We’ll wait for Clay.  His show ended around 9:30.  We waited until MIDNIGHT.  And no sign of Clay.  It started to snow and that is when we decided it would really be in our best interest to get home. I don’t know if Clay ever came out and signed or shook hands or anything… I am kind of bummed we waited that long for nothing – as I have not yet met Clay… but I figure we will have another chance and hopefully it will be in much warmer weather!

Setlist under the cut 🙂

Love Story
Mack The Knife
A Kind of Hush
What Kind of a Fool am I
Breaking Up Is Hard To Do
The Way / This Is The Night / Measure A Man / On My Way Here / A Thousand Days / Open Arms / Invisible
Something About Us
Q – A Foggy Day in Londontown
I Kissed a Girl (autotune)
Suspicious Minds
Build Me Up Buttercup
You Don’t Have To Say You Love Me
Moon River
Who’s Sorry Now (Irish, Hip Hop, Grunge)
It’s Only Make Believe
Can’t Take My Eyes Off Of You
Q – Cry Me A River
Crying Over You
Unchained Melody
—
Both Sides Now
In My Life