My Get Glue Stickers!

January 14, 2011 by ConcertKatie No Comments 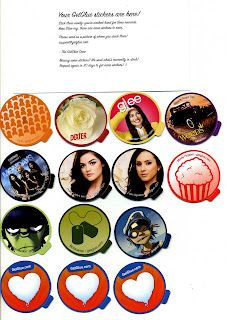 As I had previously mentioned, I had made 3 requests for stickers.  My first was around October 30th, second was the beginning of December and 3rd was January 3rd.
I am not exactly sure which of these requests were fulfilled with this package, it was postmarked January 6.
All of the stickers I received I had earned with the exception of the last 3 – I’ve never even seen them before (aside from other posts of people showing the stickers they’ve gotten) so I assume they are just promotional stickers for the website.  The other I received were Cult, Dexter First Cut, Rachel, Weeds Road Trip, Pretty Little Liars Rosewood Insider, Pretty Little Liars Aria, Pretty Little Liars Spencer, Movie Hopper, Gorillaz Murdoc, Bootcamp, & Gorillaz 2d