January 3, 2011 by ConcertKatie No Comments

Share something that makes you smile. (Can be a photo, an idea, a memory – anything that comes to mind). 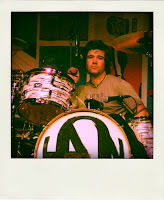 This picture is a few things that make me smile all in one – Zac Hanson, drummers, concerts w/ friends, front row, seated shows, shows where I can get my “big” camera in, shows with good lighting
The Daily Post

I just found out about “The Daily Post” which will be posting prompts daily (go figure!) to get people to blog every day in 2011.  I’m not sure I can commit to that entirely but I figured I would do their first few prompts and see where we end up from there.  Worst case I do the previous weeks every Monday or something like that… at least until I get bored 😉


Australia is definitely one. I can’t really put my finger on why but I’d love to check out the Sydney Opera House and I guess I think it is cool that it can snow there on my birthday since it is winter there in July! And their toilets flush backwards… (Or maybe ours are backwards?)

Paris… I seem to have a fascination with the Eiffel tower. Not sure why… but I’d love to visit it!


Ok so this is not a country – but Africa. I very much so would like to go on an African Safari.  I guess if I have to pick a specific part I would say Sierra Leone – I don’t know if they have safaris but the boy I sponsor, Moses, lives there and I’d love to meet him 🙂

January 1
Name someone who deserves more credit than they get. And for bonus points, how to change things so they get more

Hanson. Duh. They get written off as kids or a one hit wonder (or are thought of to be ridiculously old for some reason) but they are actually incredibly talented and definitely deserve a lot more credit than they get.  Shout It Out is one of my favorite albums, probably ever, but it sold very poorly because a lot of people decide that since they didn’t like MMMBop they won’t like their stuff.  Well, it has been 13 years since MMMBop, you’ve grown up and so have they – so give them a chance! Not to mention, their live shows are amazing… I wouldn’t keep going back for more if they weren’t.  Honestly I think the only way to change this would be for them to change the band’s name – and I would hate for that to happen (and I am pretty sure they would never do it either) so I will just continue on being clued in to one of the best kept secrets of music!

January 2
What’s the single most important thing you accomplished in 2010?
I’m sure there were more important things – but I am going to be trivial and narrow it down to meeting John Mayer.  That has been on my life list since I first saw him live in 2002 or 2003. (It sucks I can’t list all my concerts off the top of my head anymore like I used to! haha) I just love him and I thought our meeting was fantastic even if it was rather short… (though we totally monopolized him haha) and I love him.  Even though he has no filter and just says things as soon as they pop in to his head and that tends to get him in trouble.

…and speaking of doing things daily – I started a tumblr.  It is a little bit of everything (because I didn’t feel like making a separate account for reblogging stupid things) but the main purpose is to do Project 365 where you take a picture a day for a year. I decided to start on 1.1.11 rather than at some other point – so every day I will take a picture of something – it might be random or it might have a purpose or you might not understand what the heck it is I took a picture of.. but it will be posted at http://concertkatie.tumblr.com