I love these pages, mainly thanks to my Silhouette machine.  The Silhouette is a digital craft cutter that uses craft robo.  In addition to purchasing images from the silhouette library (many are added every week) you can also use Inkscape – which is a free software – to make cut outs of any image you can imagine.  You can also cut out any font on your computer with the Craft Robo software. (This is why I decided to buy the Silhouette over the Cricut or any other type of cutter they have out there)

The Mets/Braves logos from the last scrapbook post I made were made using Inkscape.  All you need to do is a google image search.  It really doesn’t matter how large the image is that comes up, because once it is a line drawing you can make it as large or as small as you want.

Simply save the image to your computer and then open it up in Inkscape.  Then you trace the image using one of the options from the drop down menu in the program.  There are a few options you can use, based on the outline, the colors, etc and it is really a bit of trial and error how to do it.  Then you save it as a DXF file.

Once you have your file saved, you can open the craft robo program and load the DXF.  Sometimes there are extra lines that need to be removed, and this is the most time consuming part.  A lot of times the lines are doubled so if you cut it as-is, you would have just a thin outline of whatever you were trying to cut.

Sometimes it looks horrible once you have it in craft robo – which was the case with several of the 5 of 5 logos that can be seen on the ticket page in the last post I made.  I scanned a t-shirt which had the logos on it and it definitely took a lot of time to get the walkie talkie and the mega phone looking how I wanted. Perhaps one day I will post a tutorial.  Although I basically just wrote it all out – but any good tutorial should have photos as well 😉

Below the cut are the pages I did for the 5 of 5 professional photos I bought (1 5×7 from each night) I tried to make them reminiscent of the album cover.

Middle of Nowhere – this one was easy because I have the font that is used on the cover (bimini or bauhaus) of the album. All I needed to do was type out “hanson” and “MIDDLE OF NOWHERE” and ta-da.  The pansy is because of the MMMBop video and it is an actual dried flower which I ran through the sticker maker.  Very difficult to do and I’m not sure I’d do something like that again lol 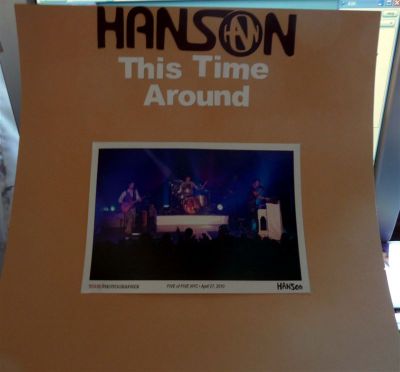 This Time Around – I couldn’t think of anything to represent the album, so I just created the HANSON from the album cover in Inkscape.  The “this time around” I tried to get to a basic font close to the one that was on the album cover. 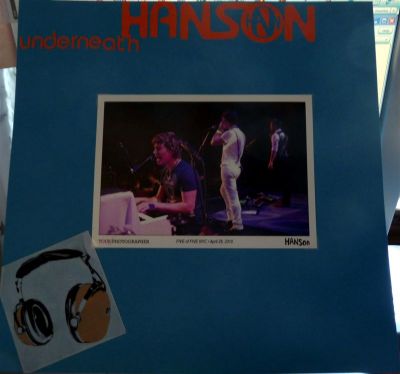 Underneath – The Hanson for this album was the same as this time around so I only had to cut it out in a different color.  The underneath was basically the same font as middle of nowhere – so this was one of the easiest pages.  Except for the fact that since the background was blue I wanted the headphones to be orange.  Hanson released 2 covers – blue headphones and orange headphones.  As orange is my favorite color, that is the cover I had them sign so I had to scan in the blue and turn it orange in photoshop!  Then I printed it on vellum paper and ran it through the sticker maker. 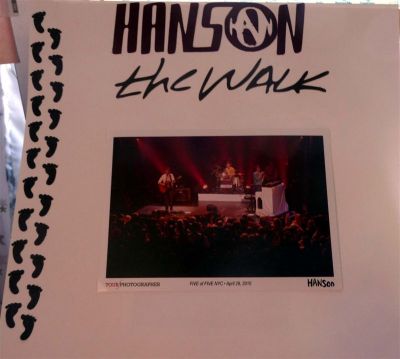 The Walk – The feet I purchased through the craft robo library.  I think they were released for St Patrick’s day for a leprechaun, and I imagine they could be used in a baby book as well.  But cutting them out black worked perfectly for this page’s border.  The new Hanson logo and “the walk” were both made from Inkscape from the album cover and I think they came out great. 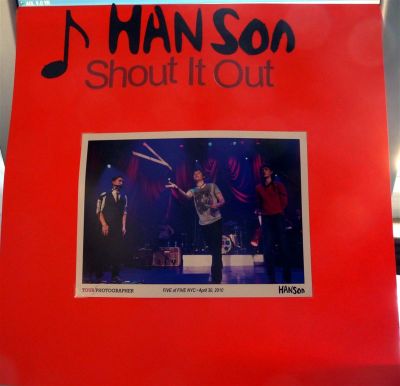 Shout It Out – I still might add more to this page, I am not sure.  The new Hanson logo was from the album cover.  Its not 100%, but good enough.  The Shout It Out font I couldn’t match perfectly, but this one was close enough for me.