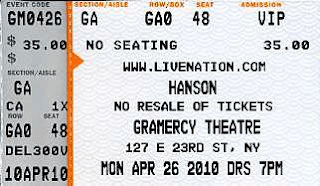 Tonight was the first night of Hanson’s 5 night residency at the Gramercy Theater. They played their debut album, Middle of Nowhere (1997) in its entirety.

Although it was obvious what songs were coming next (I have the tracklist memorized, to this day) it was an amazing experience.

The show is being recorded for a dvd release and was being live streamed as well. They had photographers who were taking photos so it was nice to sit back and relax and just take it all in as I went back to my middle school days.

Also in attendance was Ryan Cabrera! I know he is a fan because when I met him he saw mine or my friends symbol necklace and we talked a bit about Hanson and I think he has covered MMMBop in his sets before.

We left after the encore while they re-did a couple songs for the recording. Merch was limited so we had to go get it! I managed to snag one of each of the limited to 150 posters. (Now I need to make sure I buy a house with a LOT of wall space!) I also got an I heart Hanson shirt and a shirt commemorating the 5 shows. Then I lent all my money to marisa and lauren because, as usual, the stupid credit card machine wasn’t working!

Now I am on the 1122 train home. I plan to blog about all the shows on the way home while they are fresh in my mind – and so that I don’t get too backed up with my updates! (Ps this train is a lot more peaceful than Saturday nights train was!)

Tomorrow night is my favorite album, This Time Around so it should be a great night! (And even greater if I get good seats in the presale!)