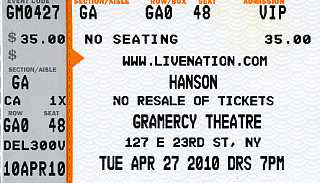 Tonight Hanson played in its entirety their sophomore release, This Time Around (2000).

The album is a fan favorite although I don’t think it was very critically acclaimed. It seemed tonight Hanson really didn’t bring their A game. At first I thought I just thought it because my heart was in 2 places at once (here and at the Honor Society show back in CT), but after the show a friend mentioned it without me having said anything about it. So it wasn’t only me who felt that way!

There were rumors of guests showing up – collabs on the cd included Jonny Lang, Rose Stone and John Popper. I didn’t get my hopes up (last nyc special show at Carnegie Hall they hyped it up and it was a letdown with no one) and it was a good thing because nobody showed.

What I forgot was that I don’t like the Isaac songs on this cd. Love Song and Hand In Hand. Though I must say Hand In Hand wasn’t that bad and out of the blue it appeared Isaac had mastered the art of stage presence. I was impressed.

I loved In The City – especially since we were in THE city… And that song is just full of energy.

The best of the night though was the ‘encore’ of Song to Sing. It was just their 3 voices and the piano AND they added in the extra verse! (There is a verse under the cd when you take the cd out of the case which they sometimes include when they sing the song live) I thought that was a great way to end the night. Again no b-sides or non album songs were played, so the show only lasted about an hour.


A Song To Sing
Sent via BlackBerry by AT