It’s time for another installment of Flashback Friday. This month I am featuring 1999. Again, I only went to 1 concert. This was NSYNC at the Meadows Music Theater, we had lawn seats (which is probably why I chose to not to include any photos other than the poster I made – which is made up of tiny cut outs of each NSYNC members heads and their flame logo. The amount of teenie bopper magazines I had to cut up to have made this must have been insane)

Check it out under the cut 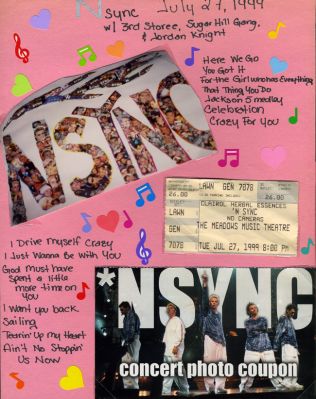