Yesterday Honor Society played their first show(s) in Pennsylvania at Hershey Park’s Ampitheater. I made the trip down there by myself as Lauren had a concert up here in CT to go to. The ride down Friday night was HORRIBLE, pouring rain on and off… but it wouldn’t be an Honor Society show if I wasn’t driving through the rain, would it? lol

I got to the park around noon and made my way over to the amphitheater with Kat and Lisa (of shine on media) and their friend. Shortly after I met up with my friend Amber who was completed rided out, so we just sat and chatted near the entrance where there was already a line forming.

We were able to hear sound check, and clips of “Full Moon Crazy”, “Why Didn’t I” and “Over You” were played. We could have gone up to the top of the amphitheater to peek inside, but figure with our luck, they’d be gone by the time we finally made it up there.

At 3pm, we were let inside. Amber and I ended up getting a spot in the 7th row, pretty dead center. The place was so tiny, that it really didn’t matter where you were, you still had a great view. Tons of merch was being sold, especially after word got out that buying a tshirt or poster got you a wristband to go to the meet and greet after the show.

I spotted the set list on the stage and took a picture to figure out what they’d be singing (which always ruins the surprise, but oh well)


The first show seemed a bit off. Everyone was really into it, and if they hadn’t had a second show I probably wouldn’t have even noticed that the first one wasn’t full energy (they totally went all out for the second show)

In the first show, Alex dropped his drumstick after he twirled it, which I had NEVER seen him do before. But he kept on going with just the one stick until he had a chance to grab another one.

After the first show, they took a walk around the park with some fans (I sat that out) I did get a chance to talk to Andrew when they made their way back briefly though.

In the second show, they threw kisses into the crowd. One hit me in the hand. It was pretty painful and my hand was red for a good couple of songs! lol Who knew kisses could be so dangerous?

Once the show was over, we waited for the greet and meet, Amber and I each got our pics with the guys, I told them I (and Lauren!) would be seeing them at least once this summer (and me twice) and before we got in reallll trouble for talking too long, I left lol

(The set list for both shows was the same)

Check out more pics under the cut 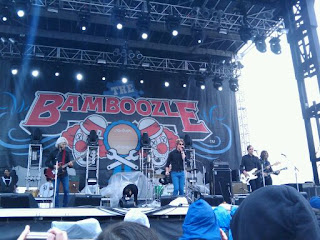 Sent to me from my friend Marisa. 🙂